Economy determines politics, never the other way around

Under the industrial and financial capitalist mode of production, the economy is globalized, which means that politics and the media are also globalized. Our grid of analysis of the bourgeois “democratic” elections that we have just published thus applies easily to the Russian context as we will demonstrate from the last Moscow electoral circus. (1)

The role of an electoral campaign

The bourgeois democratic elections are the means by which the history selects the politicians who will accomplish their mission, who will implement the economic, social and military policies required for the perpetuation of this mode of production. That’s why we say that the powerless working class is not concerned by these electoral masquerades unfolding in the opposite camp, in order to determine which faction of the bourgeoisie will direct the destiny of the whole of society.

Whatever the country where a bogus “democratic” election takes place, the scenario is immutable, the raison d’être of these mimicry always identical and the purposes of this electoral circus similar since this system was refined, in its most recent modalities in 19th century Victorian Europe.

For two years we have studied the bogus elections in the United States, France, the United Kingdom, Germany, Japan, Spain, Italy, and here was the fourth march of 2018 the electoral masquerade in Russia. Soviet Union, which since the collapse of the “Berlin Wall” has married the convoluted parliamentary and legislative modalities of the West. (2)

The four functions of an electoral masquerade

The first function of a “democratic” election (sic) is to propagate the popular populist democratic illusion … What Abraham Lincoln said was “the democracy of the people, by the people and for the

people” (sic). It took centuries for the bourgeoisie to develop these absolutist electoral masquerades that enmesh the political life of all capitalist countries (including post-Soviet Russia). The capital did not propagate this mystical formula until it had had the feeling of controlling it well. It was then the task of the go-left and the suffragettes to mobilize the activists to win the privilege of being fooled in rigged elections.

The polls are brief moments of smoking where the voter is invited to put a cross on a ballot, thus thinking to choose his rulers, when in fact the election campaign that preceded was only intended to tell him what should be his choice and which ones to discredit. In addition, the margin of maneuver of an elected representative comes down to so little that in the end all candidates could do the job, left and right, they all make the same policies dictated by financiers. Hundreds of millions of dollars, rubles or euros are spent by the plutocrats to program the “freedom to choose” and if inadvertently the voter does not understand his interest it will be time to contest the election by disclosing his own malpractices.

Contrary to what the instructions say, in this masquerade the billionaire voter – owner of media channels in his pay – does not have the same weight as the pauperized worker. The average voter sometimes believes that during these populist circuses he chooses his leaders. Here is what Francois Hollande, former French President, said on this subject the day of his swearing: “In this battle which commits itself, I will tell you who my opponent is, my real opponent. He has no name, no face, no party, he will never present his candidacy, he will not be elected, and yet he governs. This opponent is the world of finance. Before our eyes, in twenty years, the finance has taken control of the economy, society and even our lives. From now on, it is possible in a fraction of a second to move dizzying amounts of money and threaten states” (Bourget, January 26, 2012). (3)

The second inner function of an electoral masquerade is to produce consent, that is to say to compromise the worker in this mythical democratic collusion so that each country bumpkin with his voting pencil feels committed to respect the majority choice and to endorse the politics of the chosen politics, to silence his comments and of course to refrain from participating in any unauthorized revolt against the programmed authority.

The third national function of an electoral masquerade is to establish the balance of power within the internal factions that share the real power in the country. This is very risky, as we have seen in the United States, the United Kingdom, Belgium, Japan, France, Spain, Italy, but not Russia. In fact, the national capital thus exposes its internal struggles, its internal wars, its secret weaknesses, which it publicly accentuates until it paralyzes the institutions of governance. Fortunately, the capitalist bureaucratic apparatus, riddled with absolutist tasks, keeps the government tub afloat.

Which brings us to an international function of these electoral masquerades: to expose its chauvinistic nationalist strength, its power, which depends largely on nationalist cohesion and unification, and thus reassure its allies and intimidate its competitors. Suppose that for most Western capitalist countries it was the demonstration of incoherence. In the midst of the systemic economic crisis in preparation the various factions – in the United States especially, but not only – have torn apart and are now trying to paralyze. Germany has been without a government for more than a month. Italy is stricken. France has seen its former electoral formations, left and right, take the measure of their unpopularity and Macron is facing a social rebellion today. Spain has not finished self-flagging, Theresa May wants to bury the Brexit, but is looking for a way to repudiate herself ...

The results in Russia

Since the collapse of the Soviet empire, the capitalist Russia has been subject to Western attacks, to diplomatic containment, to economic sanctions and to NATO militaristic pressures. The Russian capital was therefore consensually behind the candidate that history has forged them to face these calamities.

Out of 110 million voters 73 million (67%) have voted, of which 55 million voted Vladimir Putin (76%). (4) This is a demonstration of unity and probative force, but what is very disturbing is that these voters are obsessed by chauvinistic nationalist patriotism, the indispensable ingredient for preparing a war like the history taught it. No Western head of state, that is to say no pawn of big capital, has achieved such a feat. Strangely, until the day of voting the European capitals, London at the head of the pack, fanned the embers of the great Russian chauvinism as if they wanted to reinforce the score of Putin, the champion of the “resistance” who just a few days ago unveiled the new weapons of the Red Army. (5)

The consequences of this successful electoral masquerade

It must be said that Russian capital is subject to the constant pressure of its Western competitors, where it is playing in a zone of influence in Eastern Europe that runs from the Baltic to the Black Sea, running from the Oder to the Danube, a region that also covets Germany, the second economic power of NATO, and the first of the continent. It is not the blindness of European leaders, or the belligerent policies of NATO pushing the Western powers against “Putin, the tsar of the Kremlin”, these are speculations from geo-politicians. Since the nineteenth century, Eastern Europe is the “vital space” coveted by German imperialism and the glaze that the Russian empire is hoping for. The unified Europe can only side with the power that holds the strings of European finance.

The election of Vladimir Putin for a 4th mandate means that the great Russian capital, relying on important raw materials – best bets unlike actions “evaporated” on abused scholarships – will continue to hold out on the Western capital, but it will stop trying to negotiate its entry into the European community and Russian capital will expand its trade to Siberia, Asia, its former colonies and China using the Silk Road. (6)

It is obvious that the contamination of Russian workers by petty-bourgeois nationalist and reformist ideology, as well as by archaic religious and patriotic ideas, is profound, but we must not forget that 37 million Russian proletarians did not participate in this electoral parade means that in less than 30 years a good proportion of ex-Soviet workers have already pierced the mockery of electoral masquerades or the left hand of capital battles against his right hand. (7)

Transmission and rebellion     Donald Trump: is he too dangerous to be a head of state??

Robert Bibeau is a journalist, militant and Marxist specialist in political economy proletarian for 40 years. Russian President and Presidential candidate Vladimir Putin delivers a speech during a rally and concert marking the fourth anniversary of Russia’s annexation of the Crimea region, at Manezhnaya Square in central Moscow, Russia March 18, 2018. REUTERS/Grigory Dukor 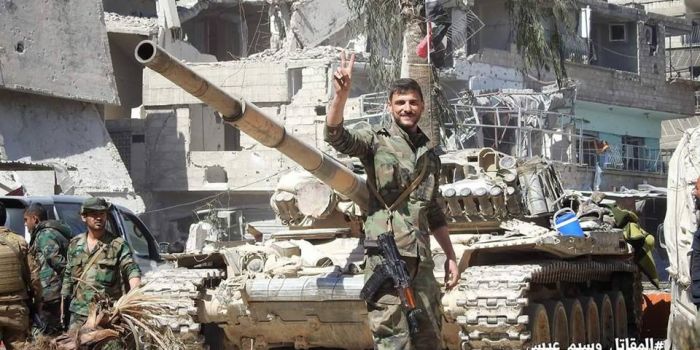