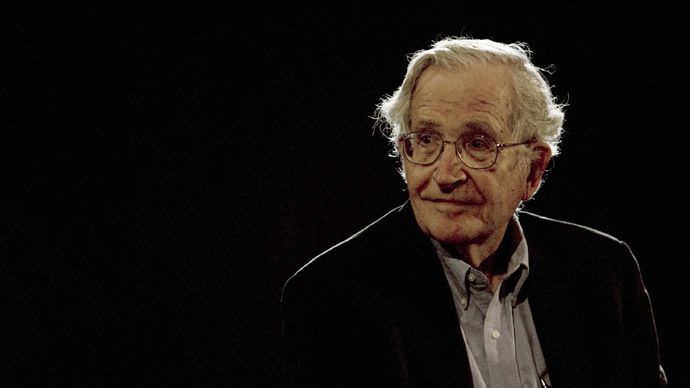 In a new piece posted at Truthout.org, Chomsky pointed to the Central Intelligence Agency’s classified review of its own efforts to arm insurgencies across the globe in its 67-year history. As RT previously reported, the CIA conducted the effectiveness analyses while the Obama administration contemplated arming rebels fighting against President Bashar Assad’s forces in Syria.

The New York Times was the first to uncover the story and Chomsky opened by suggesting the Times’ own headline for it should have been titled, “It’s official: The U.S. is the world’s leading terrorist state, and proud of it,” rather than “CIA Study of Covert Aid Fueled Skepticism About Helping Syrian Rebels.” The longtime MIT professor went on to detail some of the instances assessed in the CIA’s review and why they amount to an American regime – “the world champion in generating terror” – bent on antagonizing its opposition around the world.

“The first paragraph of the Times article cites three major examples of ‘covert aid’: Angola, Nicaragua and Cuba. In fact, each case was a major terrorist operation conducted by the US,” Chomsky wrote.

He added that it was the US, in the 1980s, that supported Apartheid-era South Africa as it invaded Angola to protect itself “from one of the world’s ‘more notorious terrorist groups,” according to Washington: “Nelson Mandela’s African National Congress.” “The consequences were horrendous. A 1989 U.N. inquiry estimated that South African depredations led to 1.5 million deaths in neighboring countries, let alone what was happening within South Africa itself.”

Chomsky also mentioned the decades-long “murderous and destructive campaign” the US aimed at Cuba, including the failed Bay of Pigs invasion and a harsh embargo that continues to this day.

“The toll of the long terrorist war was amplified by a crushing embargo, which continues even today in defiance of the world. On Oct. 28, the UN, for the 23rd time, endorsed ‘the necessity of ending the economic, commercial, financial blockade imposed by the United States against Cuba,’” he wrote.

Chomsky mentioned the dirty wars the US brought to opposition in Central America in the 1980s and current airstrikes in Syria and Iraq aimed at Islamic State, a jihadist group, like others, compiled and strengthened through American interventions in the Middle East, namely the recent Iraq war, he wrote. He ended with a note on President Barack Obama’s unmanned drone regime patrolling the skies in the likes of Pakistan and Yemen.

“To this we may add the world’s greatest terrorist campaign: Obama’s global project of assassination of ‘terrorists.’ The ‘resentment-generating impact’ of those drone and special-forces strikes should be too well known to require further comment,” he wrote.

“This is a record to be contemplated with some awe.”